Cappella Cantorum MasterWorks Chorus is once again honored to be invited to join with other major choruses to sing at a prominent New York City venue as we have at Carnegie Hall six times.  This time we’ll be participating in the Masterworks Festival Chorus singing Duruflé’s Requiem at Avery Fisher Hall in Lincoln Center as part of their Masterworks Series. 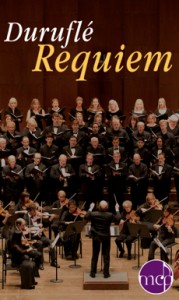 Performed by the Masterworks Festival Chorus and soprano soloist, and the all-professional New York City Chamber Orchestra under the direction of esteemed Guest Conductor Bruce Chamberlain, this is some of the most beautiful music ever written.  The use of themes from Gregorian chant throughout, results in utterly spellbinding movements.