Cappella Cantorum MasterWorks Chorus is a non-auditioned community choral group that provides singers throughout Connecticut the opportunity to perform challenging and diverse choral music with a professional orchestra as well as professional and/or member soloists.

The chorus has performed over fifty different choral masterworks, both sacred and secular, ranging from Johann Sebastian Bach’s Mass in B minor (BWV 232) to Carl Orff’s Carmina Burana, great opera choruses and Christmas music.  Two major choral concert productions are generally offered each year, one in early December and one in Spring. 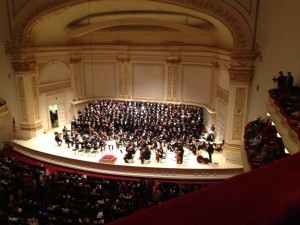 70 Cappella Cantorum MasterWorks members join with other major choruses from across the country to sing Verdi Requiem at Carnegie Hall, conducted by John Rutter on April 15, 2013

The Cappella Cantorum Masterworks Chorus has been deeply honored to be invited to sing at Carnegie Hall six times by MidAmerica Productions, joining with other major choruses from across the country.

Although its original members were primarily from the Lower Connecticut River Valley and Shoreline area, the Cappella Cantorum MasterWorks Chorus now has members from more than 31 communities across the state, with singers coming together from as far west as Waterbury, as far north as Wethersfield, and across the Shoreline from New Haven to Stonington. 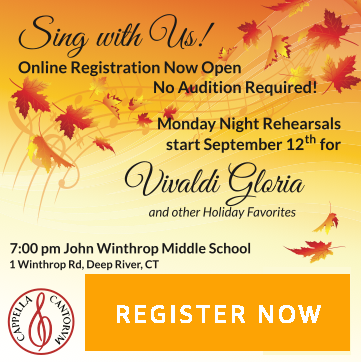 2023 Singer Registration and Start of Rehearsals