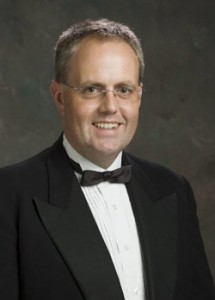 We are indeed fortunate to have pianist and organist Simon Holt as our guest organist for the Duruflé Requiem section of our concert on April 6.  Mr. Holt graduated from The Royal College of Music in London and received a postgraduate teaching certificate from Goldsmiths College, London University.  He was a prizewinner at the Royal College of Organists in London.  While in the United Kingdom, Mr. Holt performed organ recitals in Westminster Abbey, St. George’s Chapel, Windsor Castle, numerous cathedrals and the Royal Albert Hall in London.
His discography includes a recording of solo organ music and three CDs.  He has performed several times on UK radio and television, including a live performance in the Royal Albert Hall.  He has also toured Europe widely including performances at Notre Dame and Sacre Coeur in Paris and St. Mark’s in Venice as well as Holland, Austria, Germany, the Czech Republic, Belgium and Switzerland.  In May 1999, Mr. Holt and his family moved to Stonington, Connecticut, when he became director of music at Calvary Church.  In 2000 he became director of music at Pine Point School in Stonington and collaborated with Calvary Church in founding Calvary Music School.  In 2000 he founded Salt Marsh Opera for which he has been artistic director for many years.  In 2007 he was appointed director of music at St. Thomas Choir School in New York City.  In 2012 after two years as chair of the Fine Arts Department and head of music at Saint James School in Hagerstown, Maryland, Mr. Holt returned to Connecticut and is currently executive director of The United Theatre in Westerly, Rhode Island, and director of music at the First Congregational Church of Old Lyme.