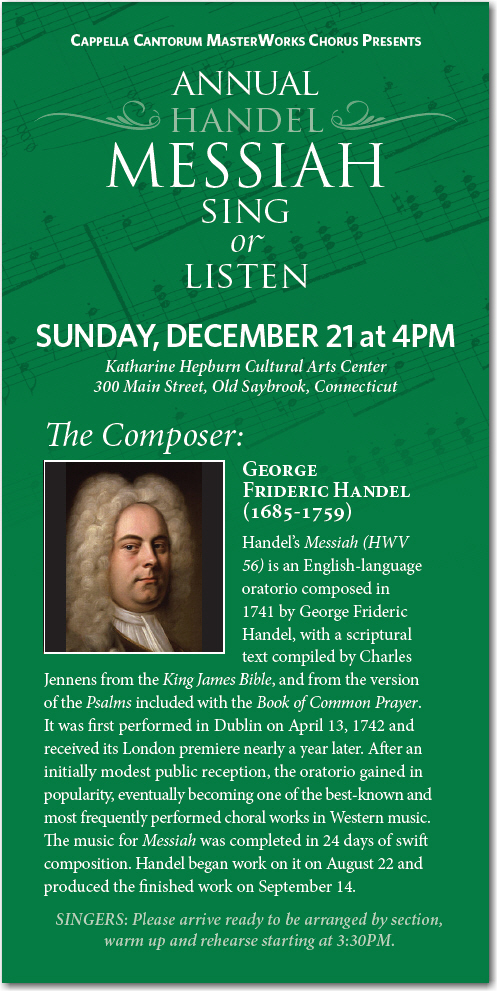 Singers: Please arrive ready to be arranged by section, warm up and rehearse starting at 3:30PM.

Open to all.  Bring your own Messiah score or one will be loaned for the event.

Handel’s Messiah (HWV 56) is an English-language oratorio composed in 1741 by George Frideric Handel, with a scriptural text compiled by Charles Jennens from the King James Bible, and from the version of the Psalms included with the Book of Common Prayer.  It was first performed in Dublin on April 13, 1742 and received its London premiere nearly a year later.  After an initially modest public reception, the oratorio gained in popularity, eventually becoming one of the best-known and most frequently performed choral works in Western music.

Handel’s reputation in England, where he had lived since 1712, had been established through his compositions of Italian opera.  He turned to English oratorio in the 1730s, in response to changes in public taste; Messiah was his sixth work in this genre. Although its structure resembles that of opera, it is not in dramatic form; there are no impersonations of characters and very little direct speech. Instead, Jennens’s text is an extended reflection on Jesus Christ as Messiah.  The text begins in Part I with prophecies by Isaiah and others, and moves to the annunciation to the shepherds, the only “scene” taken from the Gospels.

The music for Messiah was completed in 24 days of swift composition.  Having received Jennens’s text some time after July 10, 1741, Handel began work on it on August 22 and produced the finished work on September 14.  The autograph score’s 259 pages show some signs of haste such as blots, scratchings-out, unfilled bars and other uncorrected errors, but according to the music scholar Richard Luckett the number of errors is remarkably small in a document of this length.

At the end of his manuscript, Handel wrote the letters “SDG”—Soli Deo Gloria, “To God alone the glory”.  This inscription, taken with the speed of composition, has encouraged belief in the apocryphal story that Handel wrote the music in a fervor of divine inspiration in which, as he wrote the “Hallelujah” chorus, “he saw all heaven before him”.